After Jackie Pablo Larrain returns with another story about another amazing woman or rather an enigma of a woman, Ema, the bright blonde-haired protagonist at the heart of the story. Following a family tragedy, Ema, decides to take fate into her own hands and goes on a journey of self-discovery through dance, sex, art and love no matter who gets in her way. During the London Film Festival in October 2019, we were lucky enough to sit down and have a talk with Ema herself, the wonderful Mariana Di Girolamo who brings this complex character to life.

Vulture Hound: First of all, great film and fantastic performance. Can you talk about what first attracted you to the role and how you became involved?

Mariana Di Girolamo: It was to work with Pablo actually. I’ve admired him for a long while, I’ve watched all of his films, he’s an amazing director. When he offered me the role, I said ‘YES!’. I didn’t know much about the character apart from that Pablo had said that she was a free woman and that I had to cut my hair. It was guaranteed that the film was going to go ahead at the time we talked about the role as Pablo was involved with a few other projects. Then, a month and a half later he called me and said ‘right, it’s going ahead and you’re going be the protagonist’. So that was it! We started with the training part, dancing. We cut off my hair, keeping to his promise.

VH: You’ve mentioned the hair a couple of times and I wanted to ask about as it stands out.

VH: Ema’s whole ‘style’ stands out but her hair, peroxide blonde, is what completes her look but it doesn’t suit her. It comes across as she’s wearing it like a mask as if she’s trying to hide something. What was the decision behind this?

MDG: I’m not sure what Pablo’s decision was around this but he had a set idea of what Ema’s look was going to be, in terms of the haircut and the colour of it, and when people have asked him on the festival circuit what this hair was about his response was ‘pop culture’. He wanted Ema to be a representative of pop culture. Ema was a construction that starts from the outside to the inside. There wasn’t a script to start with so we started with the dying of her hair, her clothes, how she dressed, her dancing then on the set we started to look for her identity and how she gets involved with the other characters. But we didn’t have the whole script, we shot isolated scenes.

VH: Ema has another unusual part to her, she has a flamethrower which is seen a few times in the film, it’s as if her accessory and way to calm down. Do you think if Ema needed a break, in the next chapter of her life, you’d see her going off into the distance with it?

MDG: I think that the fire element is important in the film. Ema is like the fire. She’s very hypnotic and dangerous. I would say, she’s like the sun. She attracts people, you love her but you want to be far away from her at the same time. She uses the flamethrower to burn so that she may sow again. You need to burn down what’s there if you want to create a new order. It’s also very liberating to use. The pressure of this thing is powerful. It’s beautiful to see the open flame in the open sky.

VH: The colour scheme of the film is so bright. Everyone wears colour, apart from Gaston who blends into the background.

MDG: The atmosphere and colours of this film are amazing. Pablo has never worked with these colours before. 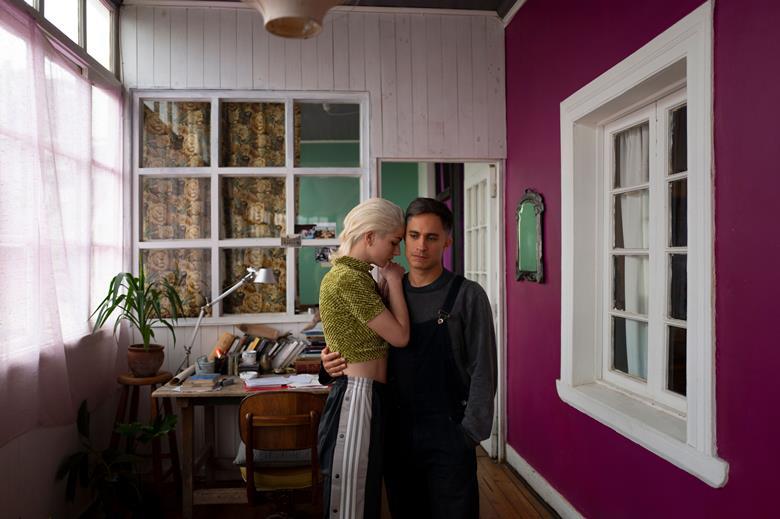 VH: Going back to Ema as a character, at some point she ‘goes off the rails’ in a predictable way after something bad happens. But even though she acts out, it seems as if all her actions are planned. Or is this just her saying ‘I want to be free’?

MDG: I think it’s both planned and her wanting to be free, it’s her strategy and I think that she’s the director of this big orchestra. But I also think that what happened to Ema and Gaston (Gael Garcia Bernal), this tragedy, the returning of their adoptive son, it’s an awful place to be in, but it leads her to this path of freedom, emancipation, liberation. But she wants to have a family, her own family, a diverse family and Gaston and she destroyed this other family to get the child back and create this new family. We see them later in a scene all doing their own part and they’re all happy, this works. But of course, you later see Ema filling the petrol can and think, what is she going to do now?

I think it’s an open film and you have to complete it with your biography, your story and that’s why you keep thinking about the film because it’s not conclusive.

VH: It feels like an episode in Ema’s life, especially with the final image at the end.

MDG: That’s what Pablo says. It’s like a moment in her life and you don’t know what’s going to happen next. It doesn’t matter what happened before because we shot some scenes with Ema and Gaston, showing their family life with Polo but Pablo cut those scenes out. The film starts the day after those scenes.

VH: In my opinion, it works better without those scenes. If we’d seen the three of you being a happy family it would be jarring with what’s going on in the rest of the story.

MDG: Me too. But in general, we worked like that, shooting a lot, then in the edit, I didn’t know what was going to be in the final cut. It was a surprise for me and I liked it, I liked it very much.