“We three kings of Orient are my dears!” – The Amazing Mr. Blunden (Blu-ray Review)

Ghosts are real. That is what you have to believe when entering the world of The Amazing Mr. Blunden especially as the family film classic was based on ‘The Ghosts’ by Antonia Barber. The element of supernatural isn’t a spoiler as its one of the first topics talked about, the belief in the spirits and whether they are feared. Ghosts are more than they seem and for the heroes in this story, overcoming any fear or second guesses is just one layer to this time travelling ghost story.

On a cold Christmas Eve, kindly old solicitor Mr. Blunden mysteriously visits the Allen family, who have recently hit on hard times. He offers Mrs. Allen the position of caretaker to an old estate where she and family can live in a cottage on the grounds. Jamie and Lucy Allen soon encounter more strange happenings when they meet two ghosts who used to live in the mansion house. Transported back in time, they find themselves working against the clock, trying to help their new friends and right a wrong that took place over 100 years. 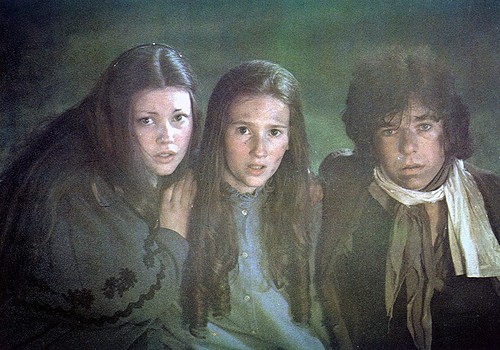 With a title change from the original source material, the film automatically becomes more family-friendly and suggests that this mysterious Mr. Blunden is some sort of supernatural being but in fact, he’s just a gentleman trying right a wrong that happened 100 years ago. Maybe the film could have been called, ‘The Mysterious Mr. Blunden’.

Horror does make an appearance in the form of Mr. and Mrs. Wickens, the latter, a cleverly disguised  Diana Dors, she steals the scene whenever she shows up. These two nasty characters are more than the evil caretakers of the house, they are the reason for the entire plot of the film. Without their plan to kill off the children, Lucy and Jamie would not need to time travel back to save the day. The film has been quite charmingly described as a ‘family-friendly Hammer horror’ which manages to give the film too much credit and not enough. The film has that rare quality where it both charms, amuses and has us enthralled, an edge of mystery that is never really solvable which is most likely why it is returned to time and time again. But don’t come expecting any genuine scares. A group of weird and wonderful characters that are both stereotypical and a joy to watch, a story that has you on the edge of your seat and most of all, the amazing Mr. Blunden himself, are all elements to a classic film that at last get its special edition treatment.

Based on: The Ghosts by Antonia Barber

1 thought on ““We three kings of Orient are my dears!” – The Amazing Mr. Blunden (Blu-ray Review)”