The art of the slow burn thriller is one that knows how to hold everything in suspense without the actual plot and characters becoming boring. As well as keeping the mystery alive and intriguing without going over the top with hints to later events or being too darn obvious that you can see what is about to happen. Karyn Kusama knows how to keep the tension high and suspicions to a maximum without letting the drama boil over into melodramatic, she keeps the balance.

Will, still grieving the death of his young son, accepts an invitation to a dinner party from his ex-wife Eden and her new partner David. Accompanied by his new girlfriend Kira, Will goes back to the house where he used to live, greeting old friends who have also been invited. As well as the mystery as to where Eden has been for the last two years, there are still unresolved issues between the group. But something else is bothering Will, who suspects that something more sinister is going on. 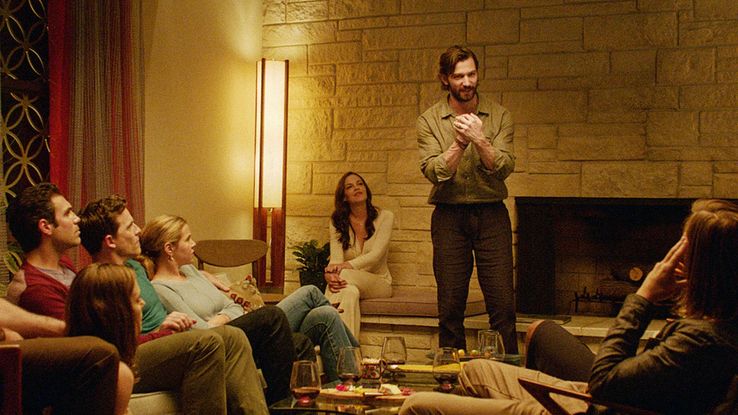 As the audience, we are invited to the dinner party and through Will, we are given an insight to who everyone is and what connects them all. Will is the turbulent soul, still grieving and unable to understand how Eden is able to stand in front of him and act like everything is ok. As well as an intense thriller with sinister intentions, this story is also about death and how we accept it, whether it is the loss of someone we love or whether we can embrace our own death.

Will and Eden have tried to cope in different ways as well as having moved on with their lives in different directions. Will holds on to his pain and sadness, but he still maintains a life with Kira and to an extent his friends. Whereas Eden has chosen to forget about her son and the life she had before and channel it into a new belief system with dangerous outcomes. The acceptance of death is brought to the forefront when a video made by said organisation literally shows someone dying on camera. This is where David and Eden have been for the last 2 years, working through their grief. The word ‘cult’ is jokingly thrown around the group as well as others knowing what the organisation is all about but the video isn’t the focal point of the dinner party, it is just a hint at whatever comes next.

Death is inevitable and inescapable, but aside from this theme throughout, sacrifice is also the key to Kusama’s story. The very first scene sees Will accidentally hit a coyote with his car and has to put the animal out of its misery. He doesn’t want to do it but he has to. This image is what carries throughout the film but is never repeated, unlike his flashbacks to happier days with his son and friends which are filtered throughout.

The Invitation is out now on DVD/Blu-ray