Political thrillers can lean towards action, conspiracy and rather other the top climaxes, at least where Hollywood is concerned. TV shows about politics have been passed around the globe, long format giving way for character development, context and further explanation on events. But watching a political thriller film, as an outsider to the country its about can at times feel alienating.

Manuel Lopez-Vidal, or Manu to his friends, is set to move up in his party but when illegal activity within the party is exposed, Manu is the one who falls from grace. Other party members also involved in the scandal distance themselves, letting Manu take the fall as the ringleader. Not willing to let things lie, he takes matters into his own hands, even risking his life to proof he is not the only one to blame. 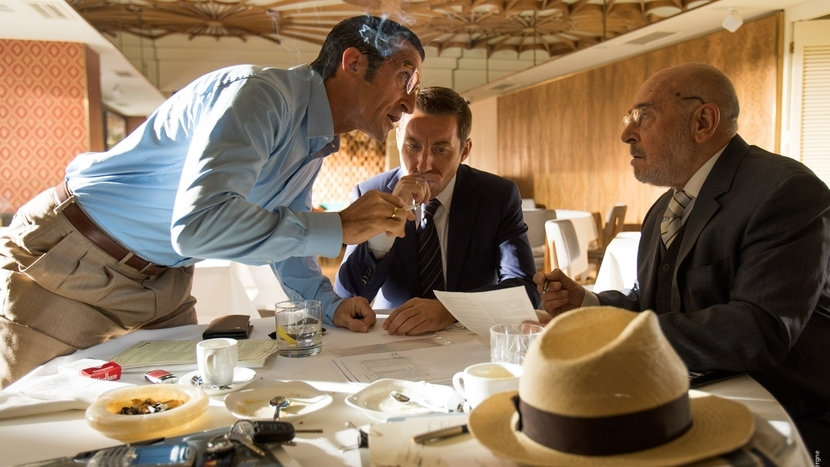 Unusual for a political thriller, Manu, is guilty but is not entirely to blame. He is being used as a scapegoat for the rest of his party. Turning detective and desperate to find evidence that will implicate everyone rather than exonerates him, he wants revenge but also to finally tell the truth. Yet Manu and in fact no one else in the party, shows remorse, merely slight panic that they’ll be named and shamed. The journalist that Manu agrees to talk to and appear on her ‘hard hitting’ show is meant to be the voice of all the citizens, acting moral and above the petty behaviour of the politicians, but instead she comes across as arrogant and difficult to side with. Manu is more forthright in his TV interview and has tunnel vision on what he wishes to achieve. Ending on a question that is meant to be feel like a huge cliffhanger but ends up as odd.

With little context to go by, the conspiracy element to the thriller is perfectly ramped up through the soundtrack of the film. Electronic beats in moments of panic create the panic in character of Manu. Moments of conflict are accompanied by bass notes that make it feel as if everyone is about to explode. With the charismatic Antonio de la Torre at Manu, driving the film through the low life politicians living the high life, the film is saved from too confusing a plot.