Nationalism has been a trope of modern Puroresu from the very beginning. In the late 50s, Japan was still struggling with its place in the world. Not quite yet an industrial giant, reconstruction after the Second World War left a country safe from tyranny but lost in a sea of self-doubt. Looking at the environment around him and blackballed out of the Sumo circuit that made him a star, Rikidozan started his fledgeling promotional efforts with a dual aim: like Japanese heavy industry, he would adopt the best ideas the West had to offer then improve on them. He would also frame his story telling in a way to encourage positive thought to the Japanese national condition. After taking a long learning excursion he returned to Japan a conquering hero. His connections within the NWA afforded him the services of the Sharpe Brothers tag team. Large vicious monster heels straight out of Texas, and with a heavy brawling style that betrayed their native roots, Rikidozan paid them handsomely and entirely new professional wrestling industry was born in one match. 70 years later, learning excursions, monster foreign heels and intricate storytelling that plays with the fans emotions on a deeper level are still mainstays of the Japanese wrestling experience. The JWA, Rikidozan’s promotion gave way to New Japan and All Japan, but whether it was Strong Style or King’s Road, the aim and the means are still the same. 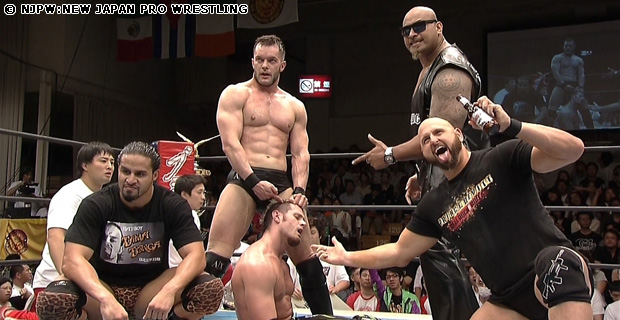 Then came the original Bullet Club. Prince “The Real Rock N Rolla” Devitt known now as Finn Balor in WWE, Karl “Machine Gun” Anderson, Bad Luck Fale and “Bad Boy” Tama Tonga, real-life Dojo Brothers who grew up in the New Japan system. In the storyline, they knew better, hell, Anderson was even a member of CHAOS, the defenders of Strong Style. When they turned on Ryusuke Taguchi and then Hiroshi Tanahashi, it meant something deeper than a simple heel turn, they wanted to break free of the tradition, to stake their claims to what they felt was theirs. As Fale said in a recent interview with NJPW1972.com “The Bullet Club way is always the New Japan way. You work together to get things done. We learned that from the Japanese way of doing things.“

Devitt’s smart aleck sense of humour and infuriating grin, Anderson’s quick mouth and vicious temperament, Fale’s behemoth size and Tama’s metamorphosis from an inane baby face to an apprentice killer gave them a unique place on the roster and kicked started New Japan’s international appeal. Devitt had become trapped in the Junior Division, he was their outstanding ace for nearly a decade, Anderson was a seen as just a “Faction Guy”, those perceptions boiled over into a narrative that placed Tanahashi, Okada, and all the home grown talent in the company in the firing line. When Devitt and Anderson left, Fale and Tonga took the back step and let others take the lead. They are patient men.

Now it has become their time to shine. The catalyst, it turns out, went back to earlier this year; fresh off his close run thing with Hiroshi Tanahashi at Wrestle Kingdom 12, Kenny Omega tried to recruit Jay White for the Bone Soldiers, but he was unsuccessful. Tama Tonga took notice; “Maybe we had the wrong guy trying to recruit him.”, he said in a post-match interview. Months later when Bullet Club blew up on an episode of Being The Elite, Tama held his ground and smiled wryly as his cohorts went after each other with Team Kenny and Team Cody trying to out-man each as the show went off the air and finally at the G1 Special at the Cow Palace, he, Tanga Loa and Bad Luck Fale, with an assist from King Haku, laid out their stablemates one by one, forming both Firing Squad and Bullet Club Elite on the same night. The deception was nearly over, but it had one last chapter. At King of Pro Wrestling, they finally got their man welcoming not just Jay White but Gedo and Jado into the fold. The World Class Tag Team are the key players in this affair. Gedo mainly books New Japan by himself these days, but back when Bullet Club formed it was Jado and Gedo who took the kernel of an idea, gave it to four friends and pushed it to the moon. You see, Gedo and Jado are outsiders too. They have worked for every major wrestling company in North America and Japan barring AAA and the WWE and they never forget anything because every idea is valid until proven otherwise.

The idea behind Bullet Club rests in Rikidozan’s simple formula but layered and nuanced for a modern audience. It has also been tried before, Terry Funk’s Army in FMW tread similar ground, frustrated Gaijin who were sick of losing out to Onita’s hand picked boys became a big but short-lived angle. Jado and Gedo, who both worked for FMW, understood its appeal and amplified it. Having them run with the Bullet Club OGs gives them an opportunity to guide their on-screen charges to better things and have a stake in the groups future. They also bring instant kudos and respect, but it’s obviously going to be their long-term narrative drive that fuels this story.

The active in-ring OGS that have to do the heavy lifting have been true to their word since their inception. While they respect the men who built the company, they have vowed to tear down New Japan’s traditions. Just like back in 2013 when Prince Devitt won the Best of Super Juniors with help from his stablemates and gained almost nuclear heat in the process, they made a statement with a tournament, the G1 Climax. Every match they had featured interference, taking both Tama and Fale out of contention early, but that wasn’t the point. They knew that if they created enough controversy their names would be the ones being talked about. Storyline suspensions and fines kept them in the right place but it wasn’t until King of Pro Wrestling that the final piece of the puzzle fell into place.

Jay White was purposefully bad fit in CHAOS. Seemingly trying to destroy the group from within, he caused tension and distrust that has now dissipated with his removal. White’s in-ring efforts have always been great, the question mark was if he could take the Switchblade character somewhere without looking like he was playing dress up. His surprise challenge to Hiroshi Tanahashi at Wrestle Kingdom 12 was a solid outing but his issues as a character player were glaring. As he has progressed through the year he has grown into the role, his G1 was a story of his daily improvement. With big wins against Tanahashi and Okada, he drove home his superiority and revelled in his triumph, not looking dissimilar to Prince Devitt five years ago.

This crew of Bone Soldiers know that their opportunities will come from the big guns in the yard; The Elite. When you stack them up, the OGs are much closer to the original intent of Bullet Club. The key Heavyweight members are all NJPW Dojo guys. Only Yujiro Takahashi comes directly from New Japan’s development program in The Elite and if you aren’t steeped in that tradition and the heavy burden of responsibility it brings, how can you challenge the pillars of its organisation the right way? There is the clear point that The Elite may not be around for very long. On the Road to Power Struggle shows, the Firing Squad have been matched up with CHAOS as Okada attempts to get his hands on Jay White, and the senior group tries to reassert some authority.

Factions in New Japan are static institutions, new ones very rarely come along. As is the way of things, the stables are based upon the stables in Sumo where trainer loyalty and Dojo pride are of the utmost importance, it is also another legacy of the Rikidozan days. The idea behind Japanese factions is a lot deeper than in North America. Wrestlers are grouped together by style, or philosophy, a thread that runs deeper than a mere storyline. So far entrenched in faction lifestyle that former All Japan great Toshiaki Kawada recently admitted that he didn’t even talk to people outside of his own faction in the same company, he wouldn’t even acknowledge them if they were linked to another group or senior roster member.

The protection of the group identity means that much. While that has calmed down somewhat, Firing Squad is a throwback to that era. Tonga, Fale and White are all NJPW insiders who grew up very publicly in the company, while Taiji Ishimori is a former NOAH guy he fits the mould perfectly for what they want to do: technically brilliant but morally dubious. Tanga Loa may be a WWE guy or even an Impact guy, there is an obvious family connection. Bullet Club has a grand future, they may just need to dispose of The Elite before they have their playground all to themselves.