An American couple, Matthew and Linda, move to London after Matthew is promoted. They are at first ‘helped’ by John Gissing, a new colleague of Matthew’s who has only contacted him through email. It soon becomes apparent that Matthew, is replacing Gissing. Having been left stranded in London with no money, Linda takes an interview on what is there to offer Matthew and Linda brave their new neighbour.

Written and directed (and starring) Mike Binder, the film is an outsider’s view of London and its not exactly in a good light. Binder as Matthew himself is an outsider from his job, the company he works for and the city. This is meant to be about a fresh start and the wonderful things that could happen. But the story quickly turns into, ‘how many weird things can happen to this couple’ and later onto to who can out prank the other. The seriousness that the film retains remains in Alan Rickman’s expression throughout the film. You can see he is dying to act out but stops himself and continues to play Gissing as stone cold. Another great actor to be front and centre but literally stuck playing the ‘wife’ role is Janeane Garofalo. She does have some of the better lines and gets to dress up in disguise a few times but she deserves so much more than the role she plays. 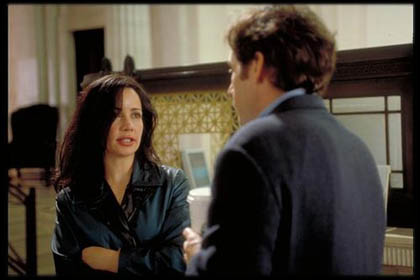 Having been through the festival circuit, the films was later released online but otherwise seemed to disappear into obscurity. A film, very much of its time, the early 2000s, with technology to match. Without a decent quirk, event or character to make it stand out, even the late great Alan Rickman isn’t utilized to his ability. A fish out of water comedy that does hit a few punch lines but ultimately the story and execution doesn’t do the great cast assembled credit.

The Search for John Gissing is out now on DVD