Film Noir is of its time. Following similar patterns in the story, familiar characters appearing in the shadows, a crimes, usually murder are committed or get the ball rolling and they always end on a dramatic note. Secrets fuel stories where women are centre stage and gangsters dominate the sidewalks where men are in the spot light. There are many films that could and can be considered from this genre which was popular between 30’s -50’s, stars were made and others disappeared, what was guaranteed was a thrilling cinematic experience and even now they have the power to scare an audience or someone who waited until the middle of the night with the lights off to watch a film.

Olivia de Havilland plays twin sisters who become the prime suspect in a murder case. At first it is believed that Terry Collins, the supposed girlfriend of the murdered doctor is guilty after two witnesses come forward, but when her sister Ruth gives a very different account of her evening, the detectives in charge of the case are unable to charge either with the case as no one can tell them apart. A psychologist, Dr Scott, an expert in the study of twins asks to include the women in his case study, while also helping the police try and find out which twin is the murderer. He soon falls in love with Ruth, the kinder of the two, but this unearths deep seated jealousy in Terry.

With a crime, a detective, a femme fatale and well, a doctor, the scene is set for a unusual but familiar set up of the genre. De Havilland is picture perfect as the twins, adding slights differences to the sisters when in company and being able to play the villain and the victim when its just the two alone. As well as murder mystery, the story delves into the psychological aspects of what drives someone to kill as well as sibling rivalry. There are a few twists and turns to the story but it is mainly down to the twins themselves, being the subject as well as the center.

Secret Beyond the Door

Taking inspiration from the fairytale story about the infamous Bluebeard and his many brides, the story also shows some similarities to Guillermo del Toro’s Crimson Peak, as well as Daphne du Maurier’s Rebecca. The charming handsome stranger who has a sense of danger in him, the new wealthy bride finding out secrets along the way to the creepy mansion, the overbearing family member and of course the strange devoted servant/colleague. This film has it all. 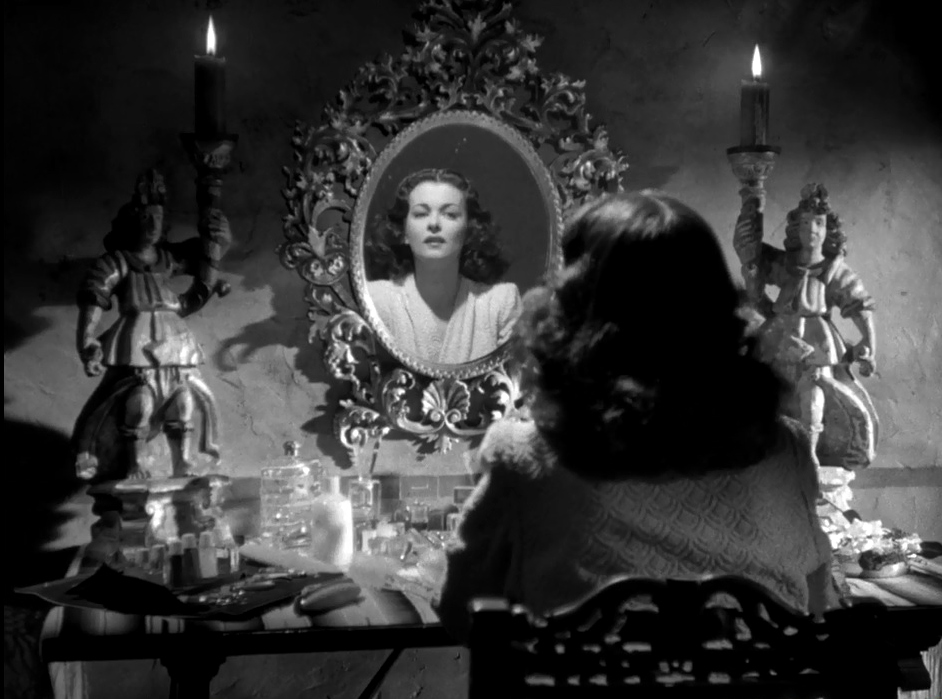 After losing her beloved older brother, wealthy Celia travels to Mexico where she meets and marries Mark Lamphere, a strange but alluring architect who whisks her away to his mansion in up state New York. As soon as the new bride arrives at in her new home she finds out secret after secret. He was married before, his wife mysteriously died, he has a creepy as hell son who shows no emotions and the strangest of all, he collects rooms where famous people were murdered, replicating everything right down to the smallest accessory.

Echoing the Bluebeard tale of secrets and the forbidden room that no one is allowed to enter, the fear that Celia first saw in Mark’s eyes when they met comes bubbling to the surface but this doesn’t stop her from a midnight wander downstairs to the room. The shadows on the walls, the music of impending doom creates a fantastical atmosphere making everyone in the film appear as sinister as those rooms. Using psychological tricks and turns, the darkness in the film reaches great heights but comes plummeting down to a dull and unbelievable anti-climatic end. There is a feeling that this was not how the story was meant to end, most likely wanting an ending that would please the audience of the time.

At first it seems this story about an untrustworthy lawyer Joe Morse, who works for a dangerous gangster, is a straight forward gangster flick, especially when Joe’s older brother, Leo, who runs a small numbers racket, illegal lottery to you and me, gets involved.

The plot seems convoluted when Leo has no choice but to join the big leagues before he is muscled out of the business. His workers don’t want to be involved with gangsters to the point of doing anything to get of the job. Joe and Leo take center stage but seem to only be one dimensional characters, only able to act a scene the same way throughout. The entire ‘operation’ the gangsters and Leo run also seems to be make sense if you were around in the 40s.

The typical Film Noir elements aren’t all there either, sibling rivalry is replaced with sibling guilt and pity. No femme fatale arrives and the female characters who are there aren’t given much to do. Relying heavily on the gangsters in the story, the film tries to be gritty and violent but its less of the former and more of the latter. The ending holds no hope for those left behind and no interest in what happens next. Boasting a more than intriguing story about a detective, Lt Leonard Diamond, who is obsessed with bringing the elusive Mr Brown to justice for all his crimes, that can’t be proved. A cop with a grudge and a dangerous evil villain who is an ambitious criminal, stopping at nothing to get what he wants, even sacrificing his own guys.

As the case begins to gain momentum after a mysterious name is revealed by Mr Brown himself, his criminal intent unravels, bring people from his past out of the woodwork and then six feet under. Danger and intrigue involve surprise witnesses to Brown’s crimes and leading Diamond closer to the truth and more importantly, evidence to put Brown away. Several crimes, a chase, gangsters and a femme fatale, all in a dirty city where crime goes unchecked, all in the making of a classic Film Noir genre film.

Secret Beyond the Door

Based on: Tucker’s People by Ira Wolfert

Arrow Academy has spotlighted four classics and restored them in all their black and white beauty. As well as each Blu-ray, there is a limited edition box set of all four films which include a DVD copy and a fantastic book including essays, critic responses from original release and photos from the films.