With Hiroshi Tanahashi rolling back the years to become our first finalist we have the potential miracle story.  On the other side of the bracket, we have two young up and comers who would to take out the former ace and claim victory in the 2018 New Japan Cup:

Feeling out early, they finally lock up.  ZSJ in control and already imposing his will upon SANADA.  They lock up again and SANADA in control this time, prevents an escape attempt, ZSJ with a reversal so SANADA flips and cartwheels his way out of the wrist lock.  Some more methodical grappling.  SANADA is more than up to the challenge and even gets the better of ZSJ who takes a little break on the outside.  This time Zack puts on a straight jacket which is reversed and SANADA keeps the hold on for a minute or two to frustrate Zack.  When ZSJ does get out he throws a mean uppercut but runs into a rana and SANADA hits his beautiful over the top rope body drop.  We get counter after counter before ZSJ hits SANADA’s arm and takes control working over the arm.  SANADA gets free and hits a dropkick before putting ZSJ in the paradise lock.  SANADA hits a running dropkick to the behind but Zack like the predator he is soon back in control.  SANADA fires some shots bit a hip toss attempt turns into an abdominal stretch, we get reversals until SANADA hits a backdrop.  He goes up top and misses the moonsault attempt which lets Zack hit the Penalty Kick.  ZSJ with a  modified guillotine which SANADA fakes into a suplex but actually locks in the swinging Skull End.  Skull End attempts being reversed into various cradle pins.  ZSJ again crawls all over SANADA who powers him up into a TKO.  SANADA with a tiger suplex for a near fall.  Moonsault again reversed by ZSJ who has an armbar in as he fires elbows into SANADA’s skull.  He takes control of the arms and looks to get SANADA in the same position that put Naito and Ibushi away AND HE DOES IT! ZSJ takes the leg and any hope SANADA has of getting out leaving him no choice but to Submit.  ZSJ has been phenomenal in this tournament and I’m glad to see him get the win and set up a final clash with Hiroshi Tanahashi.  SANADA leaves with his head held high as his excellent 2018 continues, that man will be a star by the time WrestleKingdom 14 comes around but today belongs to “The Submission Master” Zack Sabre Jr. 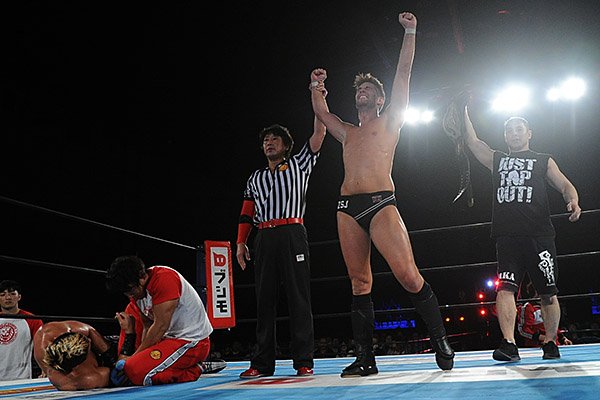 Well, our final is set, join us on Wednesday as Zack Sabre Jr. takes on Hiroshi Tanahashi. See you then, pals.