Hello and welcome to the Grand Finale of the 2018 New Japan Cup. By New Japan standards, it’s actually been quite short at only nine shows but equally, it’s been hard to call any one of them a bad show. So far at least. Let’s find out if they could make it nine-for-nine:

Holy shit. I know there are enough people on the internet clamouring to applaud Gedo’s booking but this is how you book a damn tournament. Beyond my personal bias leading me to be disappointed that we didn’t get Juice vs Ishii, there wasn’t a single booking foot put wrong here with this really being a career-maker for Sabre Jr. as he defeated Naito, then Ibushi, then SANADA and now, the ace, Tanahashi. These are four of the best (and best-looking) that have ever been in a Shin Nippon ring and frankly, any of the four could’ve been standing in the centre of the ring victorious, but they weren’t, and frankly, can anyone argue against ZSJ winning when his every match in this tournament has been fantastic. What a joy it is to have a big final with no over-booking, no interference, not even much in the way of brawling outside the ring (beyond one beautiful High Fly Flow to the outside) and inverting many clichés of performance such as getting caught of a skimming the cat as Sabre would use the opportunity to once again go after the injured legs of Tanahashi. For the first twenty minutes of the match, it was almost all Sabre as any attempts by Tanahashi to escape resulted in just being locked further in one of the numerous submissions in Sabre’s arsenal. What was very smart was the way the match played off people’s expectations, with all of the talk since The New Beginning being of Okada coming close to breaking Tanahashi’s record number of defences, seeming like the inevitable was going to be Tanahashi making a big comeback and defying the odds to win. But the odds were not in Tanahashi’s favour this time as after missing an attempt at a High Fly Flow, Sabre Jr. was able to lock in Orienteering With Napalm Death and make Tanahashi tap. Tanahashi is the Ace, he always will be but in this instance, he was just too beaten up to withstand Sabre Jr., let’s see if Okada is. 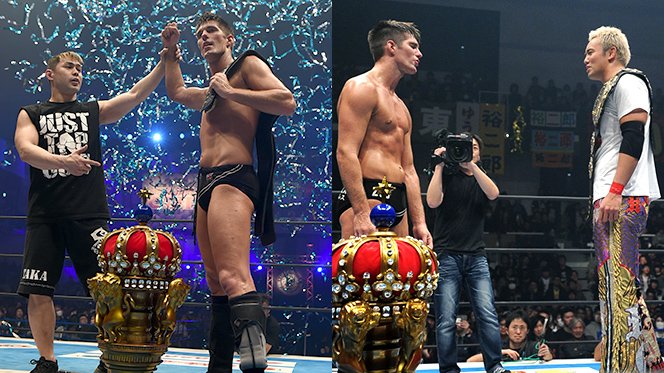